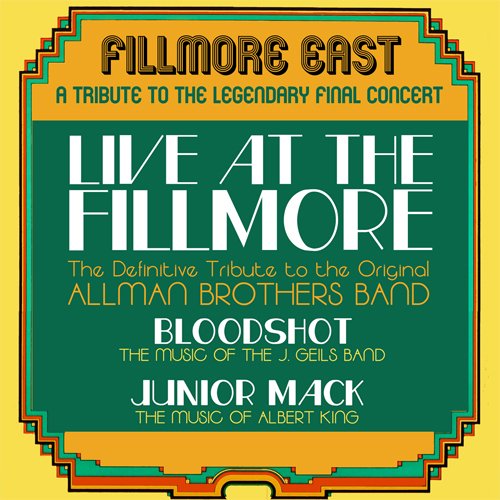 Performing “Fillmore East – The Final Concert”. A recreation of the final concert at Fillmore East NYC on June 26, 1971. Featuring Live At The Fillmore -The Definitive Tribute to the Original Allman Brothers Band, and joined by Bloodshot-A Tribute to The J. Geils Band  & Junior Mack, performing the music of Albert King

A few words from LIVE AT THE FILLMORE’s Lou Maresca:

Bill Graham operated The Fillmore East in New York City from March 8, 1968, to June 27, 1971, featuring some of the biggest names in rock and roll. Its closing marked the beginning of the end of the ‘Golden Age of Rock and Roll’.

The June 26 date ended with a marathon performance by the Allman Brothers Band that lasted well into Sunday morning. Also featured were bluesman Albert King, who had played the venue’s first night, and the J. Geils Band, one of the most popular American touring bands of the 1970s. I was sitting tenth-row center that evening and my life was forever changed.

“Fillmore East – The Final Concert” is a tribute to that legendary final night at what was aptly dubbed the “Church of Rock and Roll”.